Hiring developers with different tech stacks: how much does it cost?

In 2020, Stack Overflow conducted a massive report about the state of the world IT sector. Around 65 thousand developers took part in their survey.

One of the interesting outcomes of this survey was the creation of the chart showing how technologies are connected through each other. These patterns were noticed by repetitive answers of the developers using the same technologies or having crossovers in their tech stack.

As we can see, some technologies are really rare to use. The others are fundamental for big clusters.

All this can be taken into account when you decide which technology to use in your project. Or when you want to understand better your chances of hiring an engineer with specific expertise. 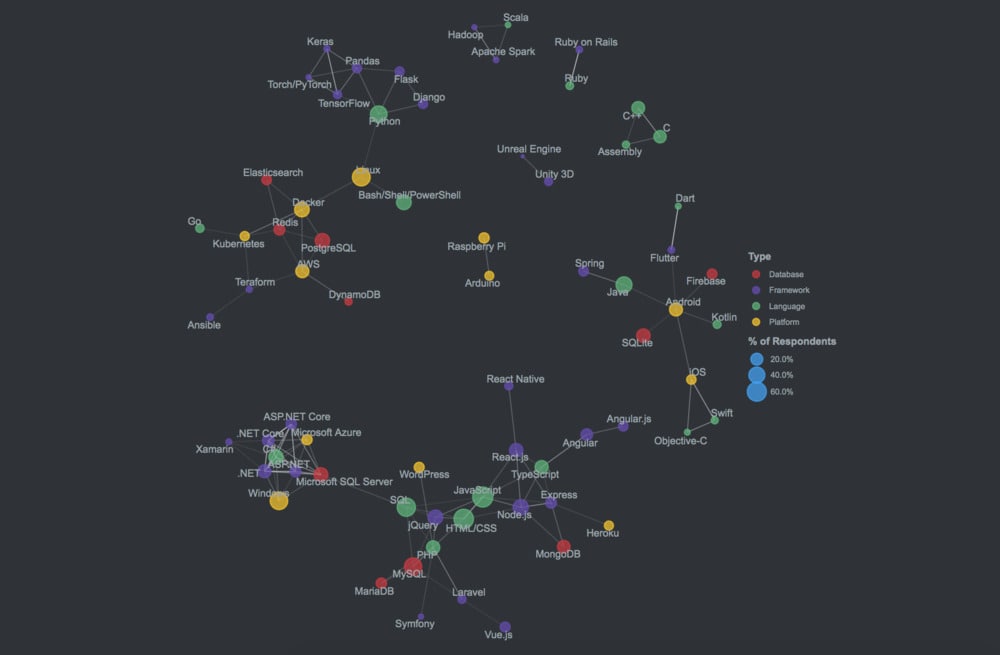 Close to it, you will find JavaScript. It won’t be too bold to say that in our world, JS is a synonym of front-end development.

Three vectors taking their start on a JavaScript basis are frameworks that works based on this language:

React.js is needed for building single-page applications and other user interfaces. And React Native, which uses the same React framework is needed for mobile apps creation.

Just like React, Angular is used for SPAs. Apart from HTML, it has TypeScript as its basis. And AngularJS is a framework for building user interfaces in web applications.

As both Angular and React can be used for similar purposes, we compared which is better to use in each case.

And if all these four frameworks are used by front-end developers, NodeJS gives the possibility to manipulate the server-side of the project and create comprehensive real-time applications.

In another direction from HTML/CSS, but also at the beginning of a very close and big cluster you will find PHP.

In the opposite way to JS, PHP is one of the core and most widely used programming languages for back-end development. At the end of the PHP’s vector, you will find Vue.js. Comparing to the previous cluster that we described, this situation is more unexpected. Even though there are known cases of apps written on PHP and Vue. Knowledge of them together with some databases makes a developer a full-stack engineer, which means they are experts in client-side, server-side, and databases.

Another programming language, Python, is forming another cluster together with such frameworks as Django, Flask, Pandas, and some others. This cluster is extremely popular and developers are rather hard to be found. Maybe in a few years, we will observe as this sector overgrows current leaders.

Java and Kotlin are programming languages best known by developers working on the Android platform. Together with iOS, Android forms the basis of this cluster.

We decided to check what are the average rates on these technologies among our partner network. There are more than 20,000 specialists in the YouTeam’s talent pool. They belong to more than 200+ outsourcing companies in Eastern Europe and Latin America. Therefore, our analysis of the market gives rather valid results.

As we see, there are no really wide differences between development rates based on technologies. The average minimum and maximum are $44 and $67.

Quite an interesting fact is the more rare technology is, the higher the minimum rate needed to be paid for development jobs. We can clearly see this in examples of Flask and Pandas. One reason behind this is that developers with these skills are harder to find. This creates a deficit in the market and the consequent rise in prices. Another way to explain this is that by the time the developer learns this rare framework, they already have a decent background in other technologies. All this experience makes their work more valuable.

One more interesting observation that can be done after comparing development rates is that not always hiring a full-stack is the most expensive way to build your dev process. According to our data, sometimes rates of full-stack developers are lower than their colleagues’ coding on the back-end.

If you want to learn more about rates on engaging some developer on your project, or how easy it or hard to find one in a current market situation, book a call with us and we will be glad to share with you everything we know. No strings attached.

Outsourcing Software Development to Turkey in 2022

How to Scale Your Software Development Team Quickly

How to Hire a Kotlin Developer in 2022: The Complete Hiring Guide

YouTeam vs Arc vs Turing: The Best Platform for Hiring Contractors